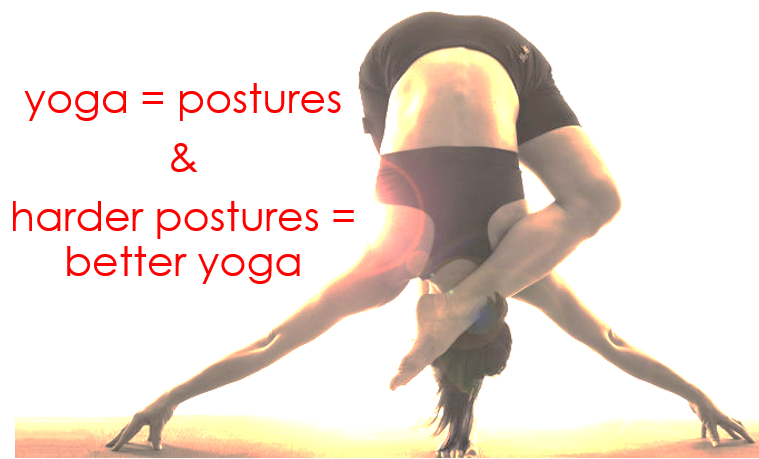 Does that sound too inflammatory? Let me elaborate. If yoga = postures and harder postures = better yoga, which is how yoga is popularly defined and delivered, then the title of this article is not really…too much of a stretch. (oooh, sorry about that one). I’ve had many students and yoga therapy clients over the years – diehard vinyasa teachers or practitioners – who not only got injured, but, eroded their structural integrity through their committed practice, or by their relentless pursuit of “advanced” poses.

One client (I’ll call Amanda) had been practicing for nearly two decades. She was a former high school gymnast, and thrilled when she discovered yoga in her twenties because she was a natural – so she became a teacher. But about 10 years in she developed back and hip pain. Eventually, it got so bad that she gave up teaching and practicing altogether. She came to me out of desperation – “I just want to do yoga again, I miss it so much.”

Research has shown that 50 percent of people who start doing yoga quit because they get injured. One reason we’re hearing stories like Amanda’s more and more often is that practitioners are aging. The ashtanga primary series was developed for lanky teenage boys, not 55 year-old women. And for most people, there’s only so long your body can withstand repetitive strain before something gives.

But I think there is an even deeper reason why there are so many injuries which has to do with how people have been taught to use yoga. Yoga postures are just tools, but if you use them like a hammer then every problem is going to look like a nail – and get the crap pounded out of it. There’s a reason for this.

In 1968 Dr. Kenneth Cooper wrote a book called “Aerobics.” It transformed the culture and spurred on a whole new industry – the fitness industry. For nearly 50 years, our culture has been bombarded with the message that cardiovascular exercise is the Holy Grail. And so when yoga started to gain popularity in the west in the early 90s, it got shoved into the same chalice.

“No pain, no gain.” You better get a workout or you’re wasting your valuable time. Hot, fast, and sweaty yoga became the rage (or as my 14 year-old would say, “it’s lit.”)

The reality is that people are probably not getting more injured doing yoga than they are doing any other physical exercise. But they certainly are missing out on something that could be even more important for their health – the healing skills conferred through slow, mindful practice.

When I started working with Amanda, I noticed that although she was flexible, her capacity for proprioception and interoception were limited, in other words, she had a lot of difficulty slowing down, moving mindfully, and noticing feelings and sensations in her body. She was irritated and impatient. She wanted to skip over the touchy-feeling stuff and get to the burn. 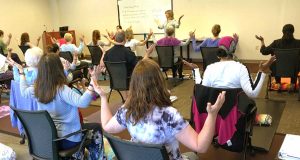 So I started to help her gently develop those skills and to her credit, she put up with the process. She realized she was holding some deep psycho-emotional patterns in her body and she was able to shift them. Now she doesn’t have to push to her full range of motion to feel like she’s getting a stretch and her body has adopted new movement patterns that don’t pulverize her joints. She talks about her subtle practice as not only improving her pain, but also opening up a new awareness about herself and her life.

1 – Nervous System – Slow practice trains you how to calm your nervous system and begins to shift it to a calmer set point.

2 – Inflammation – Through this calming of the nervous system, slow practice reduces inflammation, which is implicated in a wide range of physical and mental health challenges.

3 – Resilience – Because you take the nervous system off high alert, slow practice helps you build resilience in your body/mind (the capacity to bounce back from whatever life throws at you).

Fifty years ago our culture launched an Aerobics Revolution – now we are starting to understand the need to balance that striving, pushing and achieving mindset with a more subtle revolution.

Over the years, I’ve fielded comments from “real yoga” practitioners ‘splainin’ to me that what I teach is for beginners or old people or sick people or out of shape people. According to science, that’s just wrong. Everyone needs to learn to slow down. They may not know it yet, and people who practice “real yoga” may only be ready to face that reality after a visit to the orthopedic surgeon’s office.

I’m grateful that research is demonstrating the benefits of slower, internal practices – and I see that a critical mass of awareness is building. We live in a stressful, increasingly speedy world. Slowness + awareness is the antidote. As one of my friends and colleagues Beka Hedly says “I push in every other aspect of my life, why would I want to push in my yoga practice?”

Find out more about the Neurobiology of subtle practice April 14-15 in Asheville.