I live in the southeastern part of the U.S. and for the most part, yoga and Jesus get along just fine here. But occasionally, fire and brimstone erupts. 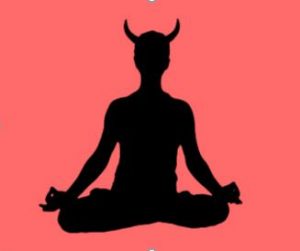 Last month a preacher of a megachurch in Missouri told his congregation that yoga postures, “were created with demonic intent, to open you up to demonic power because Hinduism is demonic.”

There is way too much wrong with that statement for a single blog post.

You’d think in 2018 we’d have moved beyond this. But actually, this stuff makes headlines every few months.

Over the years I’ve had students whose families were concerned that they were studying something occult or even satanic. One morning, one student’s husband’s truck broke down on the way to teacher training. He took it as a sign from God that she was sinning.

I had to negotiate with my facial expressions when I heard that one.

By the end of the program, she told me that he admitted how good the training had been for her, how much happier she had become, and that he had begun to understand that yoga was not satanic.

This is not an uncommon story.

My own mother was initially very nervous about my yoga practice, but after a few years, she surprised me one day when she said, “I think yoga has made you a better person.”

It’s painful to hear that someone isn’t coming to class because someone else told them that they will go to hell if they practice yoga. And having that idea implanted or reinforced by a person in a position of spiritual authority is categorically immoral.

We live in stressful times and people desperately need to regulate their nervous systems – they want to be able to live better naturally. Yoga does this better than anything else out there.

And if someone goes deeper, beyond the physiologic benefits and uses yoga to connect with and develop a relationship with their own, personal, unmediated higher power, or even if they abandon their belief system and embrace a different one (Hinduism or something else), why is this so grave? It is only problematic if you are a control freak obsessed with the shrinking size of your Sunday collection plate… or under the thumb of one.

A local Missouri yoga teacher said that her class size shrunk after this dude’s sermon.

We live in a society that is starkly isolating, psychologically dimensionless, and spiritually bereft. When someone is finding something positive through a yoga practice but then gets “warned” by their pastor – not only is it ridiculous, it’s unethical. He’s depriving his congregation of health and well being.

On my Facebook page a woman has been posting warnings to all Christians not to practice yoga.

You can see from the emojis what most people think. ?

There’s been a slew of refuting comments, but she’s been carrying that Facebook cross relentlessly for the past 5 weeks now.

There are children starving to death in Yemen, fleeing from violence in Honduras, threatened with war in the Ukraine, and the earth is in danger of becoming uninhabitable, but still some feel the priority is to set us all straight about the dangers of practicing yoga.

I’m afraid negotiations have failed and my facial expressions are winning.

Yesterday the CDC released its latest numbers on the use of yoga asanas and meditation in the U.S. 14.3 percent of the population is currently practicing yoga and 14.2 percent meditation. That’s up from 9.5% and 4.1% respectively in 2012.

So despite the sporadic, inane blow back, society in general seems to be recognizing how important these practices are.

And even if you are a vigilant Facebook crusader, you can’t stop consciousness, it will expand whether you like it or not. 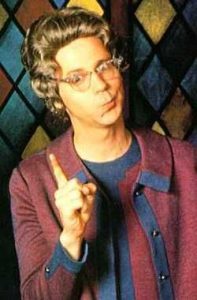