Yoga Ethics, Capitalism, and the Veils of Illusion

In 1997 I was giving a talk about the intersection of yoga philosophy and economics. I’m no expert in economics, though I’ve always been interested in how humans organize ourselves and I wanted to talk about how yoga ethics could bring a sense of conscience and morality to the conversation.

At one point in the lecture I said, “Capitalism is not the end of history.”

One woman got up and left (I imagined her snickering “Commie” or “hippie freak” under her breath on her way out).

The lecture ended to some limp applause.

There certainly was a lesson for me – stick to what you’re good at. Which I pondered for a while, and then decided to ignore. My (many) failures are actually some of the best things that have ever happened to me.

I thought then, and even more so now, that yoga, particularly the ethical principles of yoga, the yamas and niyamas, are a powerful framework from which to consider how we organize ourselves economically.

At that time, I had an American friend who was living in South Korea. He’d email me about the struggles that the Korean people were having during the Asian economic crisis (which reminds me, I recently watched Parasite…a powerful, creepy critique of capitalism). I remember in one email he wrote something like, “Americans are living in La-la land. There are economic crises happening all over the place and America is oblivious. But it’s just a matter of time before it hits you too.”

Americans are in the midst of a catastrophic economic collapse with very few social safety nets in place to catch us. Looming evictions, massive unemployment, small businesses fading away.

It’s not surprising that it’s become okay to wonder openly about whether or not capitalism is a good idea.

The basic problem is that the relentless pursuit of profits is directly at odds with operationalizing a moral framework. And when we live in this system, we are often forced to compartmentalize our economic well-being and separate it from our moral and spiritual beliefs.

But right now, as things are falling apart, we are called to be open to the possibilities of new ways of economic organization. And I’m not suggesting socialism is the answer – it’s not the end of history either.  We have to unleash all our creative problem-solving skills to dig ourselves out of this mess. I believe that the yamas and niyamas are a powerful starting point. 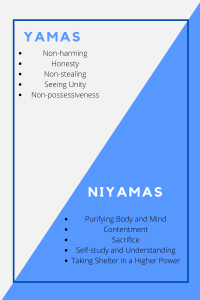 A common metaphor in the yoga tradition is the “veil of illusion”. We all have our own veils that mask the things we don’t notice, or refuse to notice, about ourselves. But we also have collective veils of cultural illusion. Like for example the American dream – that it’s open to everyone and that anything is possible. This is a trope – individual success never drops in via parachute out of nowhere. A fundamental teaching of yoga is that everyone and everything is interconnected. The myth that everyone can “make it big” in America is patently false and the source of much heart-break and suffering.

COVID-19 has proven to be a great remover of veils like this.

America’s economic disparity is growing. COVID has revealed that like nothing else before. America’s health care system is a hot mess. COVID pulled back the veil on that one too. America is rife with racism and racial injustice – just ask COVID. America’s youth are at risk – homelessness, rampant food insecurity, lack of access to technology – what kind of future can we hope for?

I am not a commie hippie (although I know and love several of them). But I am sure that we can do better than unbridled capitalism. I am sure that deep in the hearts of all but the most hardened (traumatized) sociopathic CEO is the desire for collective well-being and happiness.

If we take a short-term perspective, we can easily succumb to fear and end up in despair. So, a bigger perspective is necessary. My friend, therapist and yogi Ingrid Adelsbach once told me, “If you are struggling with a problem there is only one solution, get bigger. Then you will be able to handle it.”

We are called to develop that bigger perspective right now, because there’s another side to this crisis. We will come out of it very differently and we will think about how we want to organize ourselves differently. A new economic structure is on the horizon. As Arundhati Roy, a scathing critic of capitalism has said: 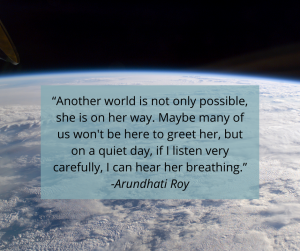 Recently someone asked me, “In the midst of all the chaos of our lives, my heart yearns for joy, and I wonder if it’s very self-centered?”

According to the ancient teachings, it is your dharma to yearn for joy. The yogis taught that all human beings want it. It’s actually built into our structure. It is what life is all about.

If you feel shame or guilt for having that desire, that is something that was imposed upon you by your family or the culture that somehow felt (probably unconsciously) deprived of that birthright.

When life is chaotic, personally or socially, the veils of illusion are torn asunder and we are forced to look reality squarely in the face. This is perhaps the deepest teaching of the tantrics – use the obstacles before you as fuel for growth. The hard times remove the veils and provide opportunities for focus and clarity. Practice the yamas and niyamas to deepen your resolve, your will, your strength, your power. 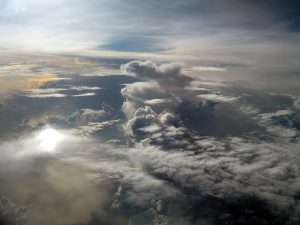