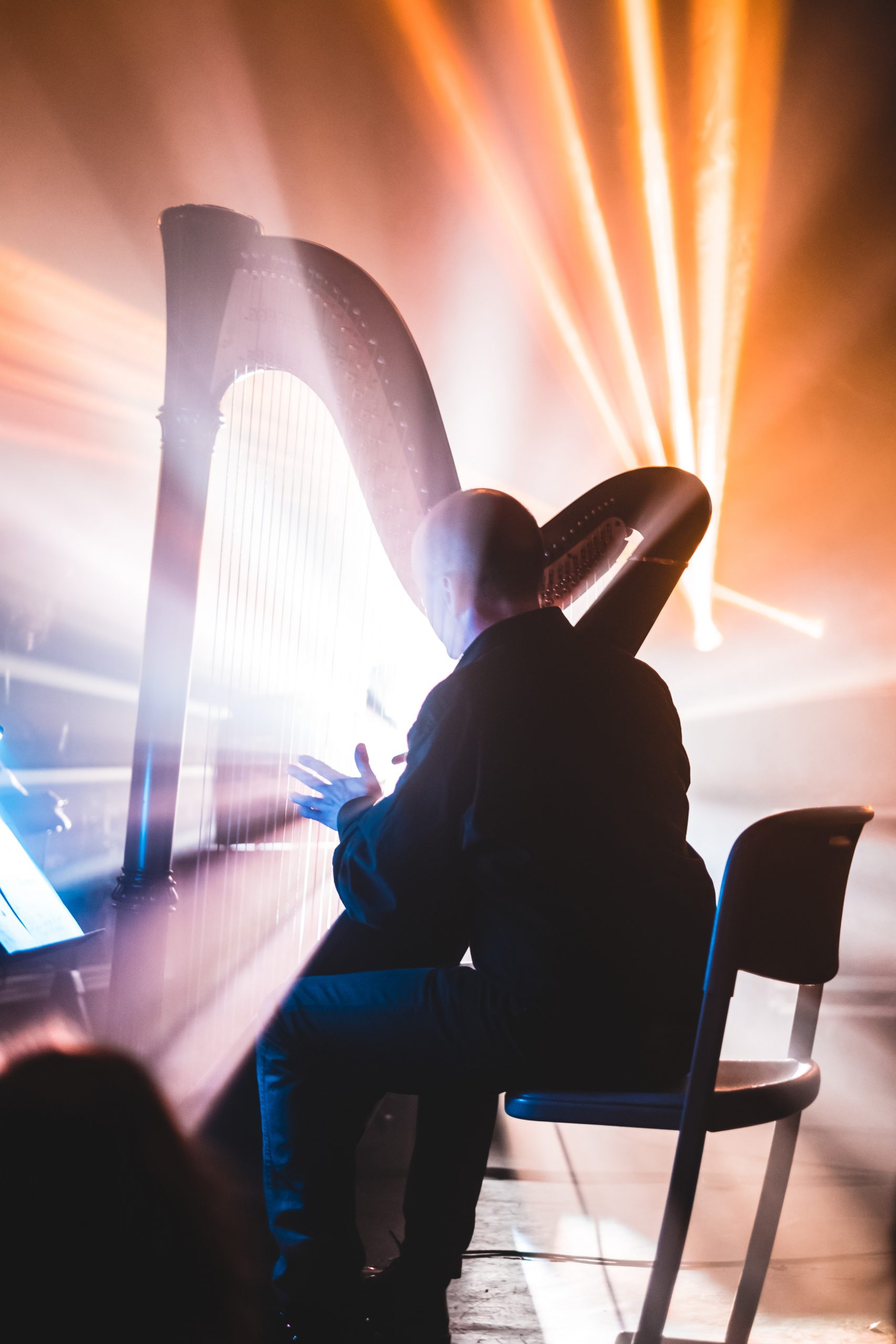 In the beginning of my yoga career, I got a job at an independent living/assisted living/nursing home/hospice facility. I was hired to provide chair yoga therapy sessions for small groups, offer massage therapy, aromatherapy, and homeopathy under the supervision of the head nurse practitioner, and to lead poetry and creative writing groups. They referred to me as their “alternative person.” 😍

It was my first professional yoga therapy gig – and it turned out to be an intensive educational experience. Over the course of nearly six years I learned about degenerative disease processes including Alzheimer’s, dementia, depression, anxiety, cognitive decline, diabetes, stroke, arthritis, and much more. As much as I was learning from the incredible staff, my clients taught me even more about living and dying with dignity. It was an amazing experience to learn so much about elders and the processes of aging. 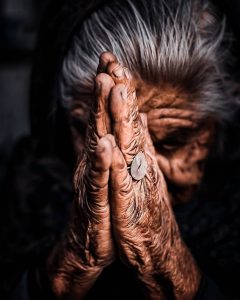 The facility, which was in a suburb of Philadelphia, was run by Quakers and it was very progressive. They believed in the Edenization of elder care and they tried really hard to create a vibrant, homey community.

Employees were encouraged to use the onsite daycare and their kids were strolled through the halls on four-seater buggies to visit with the residents, staff, guests, and their parents. There were therapy animals who visited every day, lots of musical guests including a harp player who often came in when someone was dying in hospice, gardening opportunities, a great rec therapy program, live entertainment, dances, and even decent food. 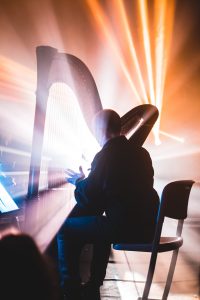 Right after I was hired, I was instructed to attend the employee orientation/training for a week. They taught us a lot about elder care and chronic conditions, but the highlight was definitely the afternoon we spent experiencing life as an older person with health challenges. The trainers gave us thick, scratched up glasses (to mimic cataracts), we put a couple of popcorn kernels in each sock (to imitate having corns), we put socks on our hands (reduced peripheral nerve function, arthritis, and fine motor challenges), and some earplugs (to simulate hearing loss).

Once we were all ready to go, we were given walkers and paraded around the facility. The staff was savvy to the role play. When we approached a nurse, aid, or other staff member, they jumped in to patronize us. In obnoxiously loud or sticky sweet voices they’d ask, “How’re you doing today honey? Did you have a good bowel movement this morning?” or comment “Watch out for this one, she’s a problem!” or “This one stinks, she must need a diaper change.” It was eye-opening, provocative, and made some of the residents laugh. 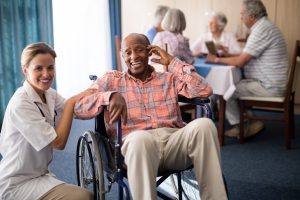 Then they marched us into the dining room and sat us down at a table and pretended to forget about us. They talked to each other about their weekend plans, pretended to make phone calls, and left the room for unknown reasons. Then they gave us some food but intentionally forgot to give us utensils. When someone asked for one they told her she was a troublemaker and asked if she forgot to take her meds.

I was 30 at the time and the experience opened my eyes to the lives of older people and the micro-aggressions and dismissal they are often subjected to. Our culture tends to treat old people like annoying inconveniences at best, pariahs at worst.

While traditional cultures value their elders for their wisdom and experience, Americans often don’t. We tend to warehouse our elders – which is a reflection of the deep dysfunction of our youth obsessed, death denying, death defying culture, as well as the fact that many families have to work as well as care for parents and children at the same time and it’s impossible to do it all. 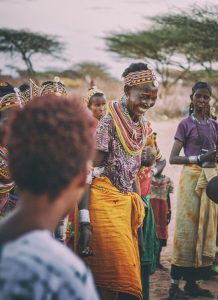 Pretty soon after I started working at the facility, I made two good friends – Elizabeth, who was 93 and Marie, who was 100. They had been friends since before they both moved in. Elizabeth was kind-hearted with a passion for spirituality. She loved to poetry and literature. One day she wrote an essay about a little side table that had appeared outside her bedroom door.

She told me that the staff sometimes rearranged common area furniture, so she wasn’t surprised, but she believed that everything happens for a reason.

When that little table showed up outside her door, she took it as a sign. “It was an inverted pyramid with three shelves,” she said. “The bottom shelf was small and wooden, the middle was a little bigger and also wooden, and the top shelf was the biggest and made of glass. I meditated on it until it finally revealed its secrets to me – it showed me that it was a metaphor for human life. All of us are made up of body, mind, and spirit. The body is represented by the smallest wooden shelf, the mind is the middle shelf. They are solid, but they can change a little. But the top, glass shelf, that represents the spirit. And the spirit is limitless.”

She told me that the table stayed outside her door for 3 days, just long enough for her to contemplate its significance. And then it disappeared.

Elizabeth’s close friend Marie was born in Germany but moved to the U.S. in the 1930s. During WW2 she was harassed for being German, even though she was a Quaker pacifist. She didn’t marry until she was in her 40s because, she said, “I had other things to do.” She told me that she and her husband gave themselves what she called a “natural” wedding. They stood out in a field, held hands and said vows, and then rode their horses off into the sunset.

They had a farm and after the war they adopted several German war orphans. Marie was a big fan of chair yoga and tried to come to every class. She also enjoyed the self-massage I taught her and practiced it regularly. She preferred homeopathy to western medicine when possible. She loved the Quaker tradition and told me that she believed that pacifism was the next step of human evolution.

It was hard to let go of Elizabeth, Marie, and the many other folks who died during my time at the facility. They had enriched my life in ways that I hadn’t expected. Sure, I taught them chair yoga and there were many regulars who believed in the practices, but they taught me SO much more – invaluable lessons about life, love, friendship, and thriving while aging. It was such a privilege to spend time with them, listen to their life stories, and soak up their wisdom.

They changed my perspective on what it means to age. They helped me understand that while aging can be difficult, it can also be a dignified, spiritual experience.

I’ve taught chair yoga in several other settings since that time – mostly to seniors, but also to vets, mental health professionals, and folks with TBIs, strokes, and/or cognitive challenges. 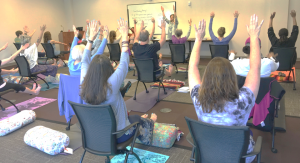 I learned to not make assumptions about people based on their age or their ability. I learned that I didn’t want to teach chair yoga exclusively for fitness or exercise. I learned that chair yoga is an opportunity to help people feel better in their bodies and mind, and it’s also about fun, celebration, laughter, caring, and sense of meaningful community.