The Truth: A Fish Story 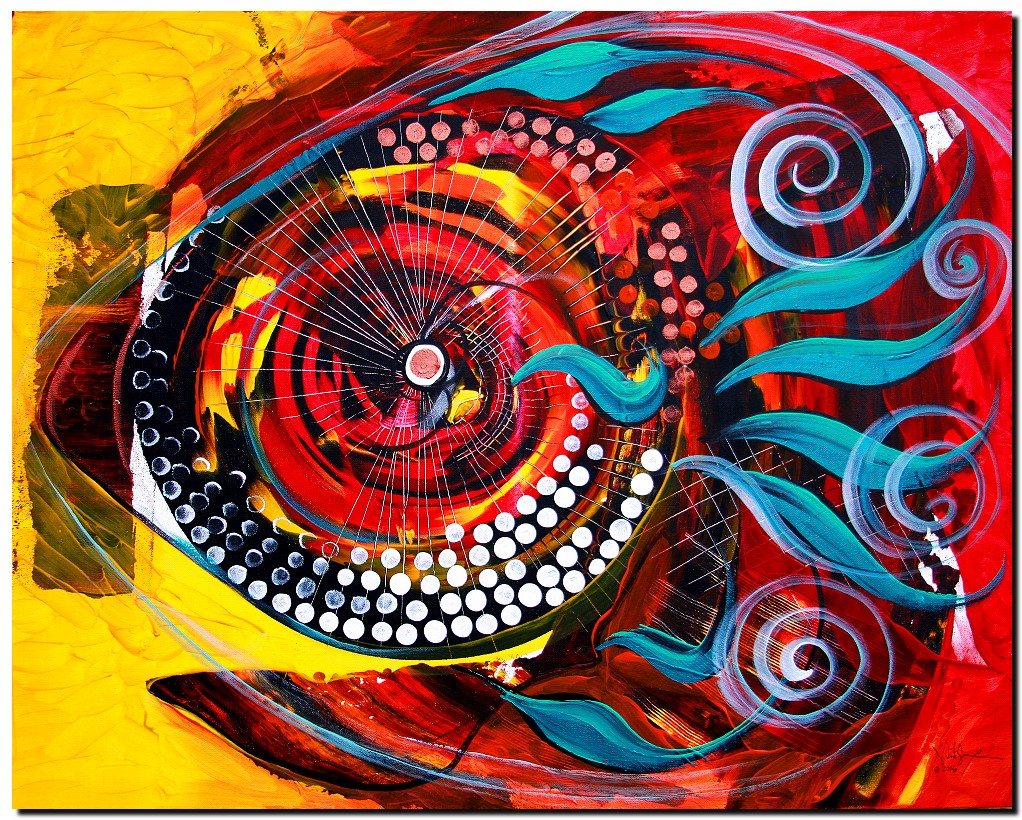 There once was a monk fish who lived at the bottom of the sea (somewhere off the coast of Vancouver, I believe) in a small cave. She liked to meditate in her beautiful seaweed grove and rake symmetrical lines in the little white pebbles around the rocks in her garden.

One day, as two young fish were swimming by, she overheard their conversation. 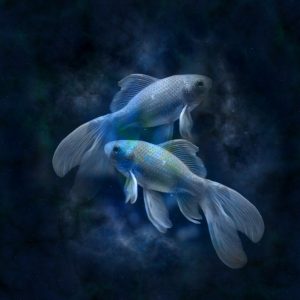 “That monk fish is SO weird,” one fish said.

“What makes you say that?” asked the second, “She seems nice enough.”

The monk fish looked up at the youngsters and said, “Hello my friends, how’s the water today?

“See what I mean!” the first fish said to the other, “What the heck is water?” 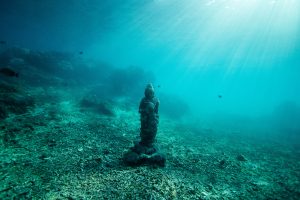 “If you would like, you may come and stay with me for a while,” she replied. “I will teach you about water and many other things.”

The first fish said, “No WAY,” and quickly swam off. But the second fish was curious.

“I have heard about you for a long time,” she told the monk fish. “The other fish say you are strange, but I am attracted to your simple way of living and your peaceful demeanor. I would very much like for you to teach me about this thing you call ‘water’ and the other mysteries of life.”

So, the young fish (whose name was Wanda incidentally), took up residence with the monk fish and became her student.

One morning, after six months of fishy monk training – including meditation, yoga postures, gill breathing techniques, and studying the ancient fish wisdom texts – Wanda’s eyes popped open (even more than usual) from her meditation and she quickly swam to find the monk fish in her garden.

“Teacher,” she gulped, “I’ve realized what water is! I can’t believe it! I never knew there was such a thing and yet it’s all around me. I feel like I just took off a pair of dark sunglasses and now I can see!” 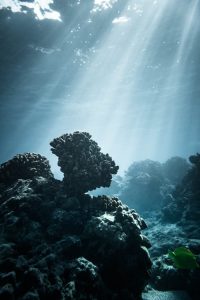 The monk fish smiled kindly. “That’s wonderful Wanda. I’m so happy that you have discovered this fundamental truth about fish life. Still, there is much to learn.”

“Do you see that iceberg over there?” asked the monk fish pointing her fin off in the distance. “If you swim up to the top of the water, you will see part of it sticking out. If you lived above the surface of the water, it would look very big, but because you can dive deep, you know that the exposed part is nothing compared to what’s underneath.”

“That iceberg is like truth,” the monk fish said. “The part that is above the water is the stories that we hear when we watch Fish News. But when you look beneath the water, you see that truth is actually very complex.” 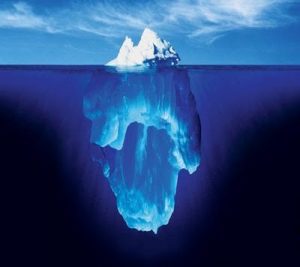 “Right beneath the surface, we start to see that truth is influenced by all sorts of things – like the fish in positions of power, the stakeholders, who are behind this so-called ‘truth.’ And even deeper the belief systems of these fish which greatly influence what is processed and delivered to us on Fish News and called ‘truth.’ Deeper still are entrenched and often mythic, emotional beliefs of our whole fish culture.”

And then she drew this diagram for Wanda: 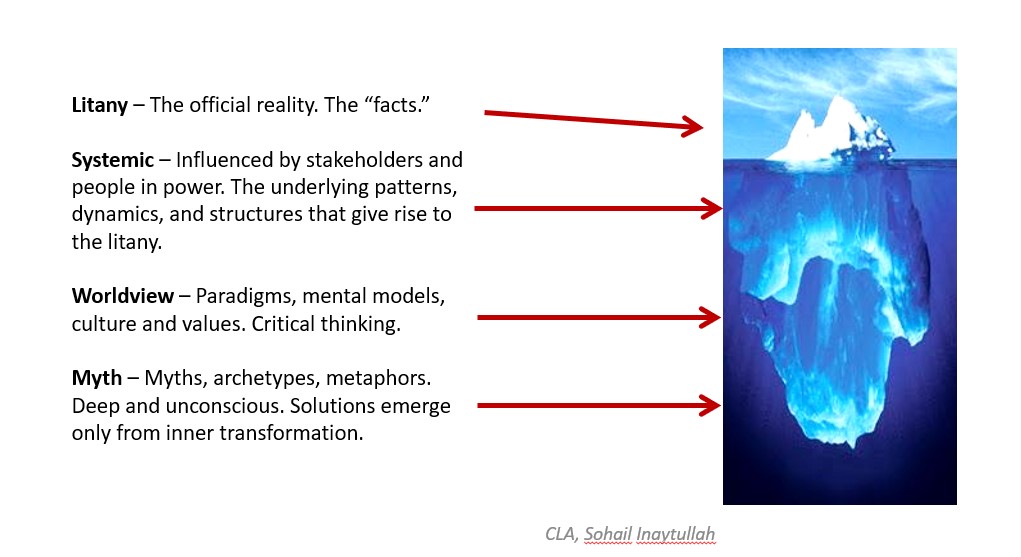 “Wow,” said Wanda. “Truth is so much more complex than I ever considered!”

“Keep doing your practices,” said the monk fish with a mysterious smile. “More will be revealed to you.”

So, Wanda went back with renewed resolve to her quest for the fishy truth of existence. After six more months she again had another revelation. But this time she was less excited.

“Teacher,” she told the monk fish sadly, “I now have realized something even more important but it’s very disturbing.

“This water that I’ve only recently realized even exists, well, I’ve now come to understand that it’s actually quite polluted, it’s bad for us. I’m really worried about all my friends and my family. They don’t even know that they are swimming in something called water, let alone that it’s polluted.”

The monk fish consoled her. “Yes, you have realized something important. What we think is normal and good can actually be quite toxic, and realizing this truth can be painful.” The great philosopher, J. Fishnamurti once said,

“But we have our practices – our meditation, our healthy eating, our fish asanas, and gill breathing techniques. They can help us stay strong even though the water is not so clean. Please, don’t stop practicing, there is so much more to learn.”

The world she had formerly known was nothing like the reality she was now experiencing and it felt disorienting. She longed for her former life. But she also knew that when she had agreed to become the monk fish’s student she had, like Neo in The Fishtrix, chosen the red pill and there was no going back. 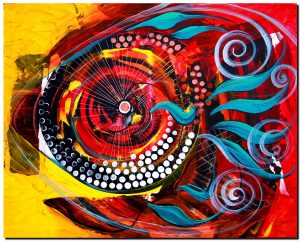 So, she continued her studies.

After six more months, Wanda began to feel something deep inside of her stirring. Slowly, it became such a strong feeling that eventually, she knew she had to discuss it with her teacher.

“Teacher, I have been here with you now for a year and a half,” she said. “During this time, I have discovered that there is water, that I have always been swimming in water, and that the water is polluted. But now I understand something even more important,” she said. “I have realized that I want to help other fish understand the reality that we are swimming in, so that we can do something about it together. Before, I believed everything I saw on Fish News, I didn’t understand that truth is deeper than the surface of the iceberg.

“Now I understand that truth has a depth that only clarifies when I look within. Now that I have studied with you, I can no longer tolerate the injustice in the sea. The news stories will only change if we create new myths, new metaphors, and new worldviews. We have to start seeing the water for what it is.” 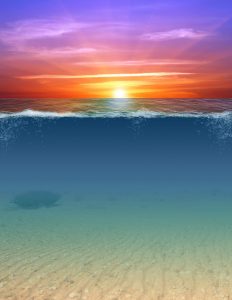 At that the monkfish put her little fins as close to each other as they could reach in a gesture of honor and said, “Wanda, you have learned all that I can teach you. Please go forth and share what you have learned. Others are waiting to receive these teachings.”

And Wanda swam off into the refracted light of the underwater sunset toward her destiny.

Check out my free ebook, Weather the Storm: A Subtle Yoga Guide for Building Resilience