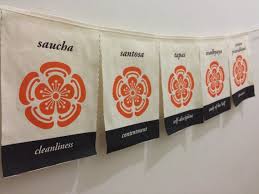 Often, when I visit yoga studios, I see yama and niyama posters on the walls – particularly, for some reason, in the bathroom. One time, when I was out of town, I found a class I wanted to take at a studio I’d never been to. When I walked in, the receptionist didn’t look up. I stood at the desk waiting for a while and when she finally acknowledged me there was very little eye contact and definitely no smile. However, a curt, “Can I help you” managed to eject itself through her teeth.

She silently took my payment for the class. I asked for a mat. That was another $2. She gave me a flaky, smelly, orange piece of something that may have once passed for a yoga mat. I should’ve asked for a different one but I felt intimidated. (Although, I really regretted that because it made me feel a bit queasy during Cobra).

I don’t take interactions like that personally; she was probably just having a bad day (although I have to say that I’m grateful the trend of snobby front desk yoga studio personnel seems to have abated somewhat over the past decade – probably because of the trauma sensitive/trauma informed and body positive movements…but I digress).

Anyway, after class, I went to the bathroom and there it was, a yamas and niyamas poster, stuck to the inside of the toilet stall door, with 10 tips on how to be better yogi.

While the bathroom is a lovely place to contemplate the meaning of Śauca (and, admittedly, pondering the meaning of life in general), sometimes it can be helpful to reflect on these principles in other aspects of our lives as well. 😸

They make nice wall art, but it’s when we practice and experience the principles, when we shift our understanding of the yamas and niyamas from concept to embodied understanding, that they then begin to actually have a transformational impact on our character.

Mahatma Gandhi and Martin Luther King, fighting for the freedom of BIPOC from attitudes, cultures, and systems of oppression, made the first principle of non-harming, or ahiṃsā, the central theme of their liberation movements.

Typically, in traditional yoga texts, when the author is listing something, the principle that comes first is the most important – which doesn’t mean the others are negligible of course, just that the first is the foundation.

Patanjali listed ahiṃsā or non-harming first because it forms the base for the other principles. First, get established in non-harming – then look at the other 9 principles. How does non-harming support them? How do all the principles interweave and support each other? 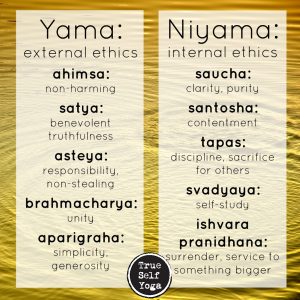 Ahiṃsā, framed in positive psychology terms, could be seen as the practice of recognizing the interconnectedness and interdependence of everything, and then responding from an empathic, caring place to every situation, encounter, or relationship. There’s a significant body of research on the personal and social health benefits of empathy. And empathy is an important antidote to harm and violence.

And, as my colleague and friend Kiesha Battles likes to ask, “How does ahiṃsā show up in your life? How much violence are you willing to accept?” Ahiṃsā never means “Be a doormat.” Unfortunately, there are times when force is necessary to overcome injustice – to prevent further harm. It’s the contemplation, the embodiment and the operationalizing of the yamas and niyamas that make them so relevant and potent. They are definitely the juice of this practice.

When we take Yama and Niyama off of the bathroom wall and into our hearts, they can begin to come alive in us. And this is exactly what the world needs at this moment.