Stop Being a Pain in the Butt 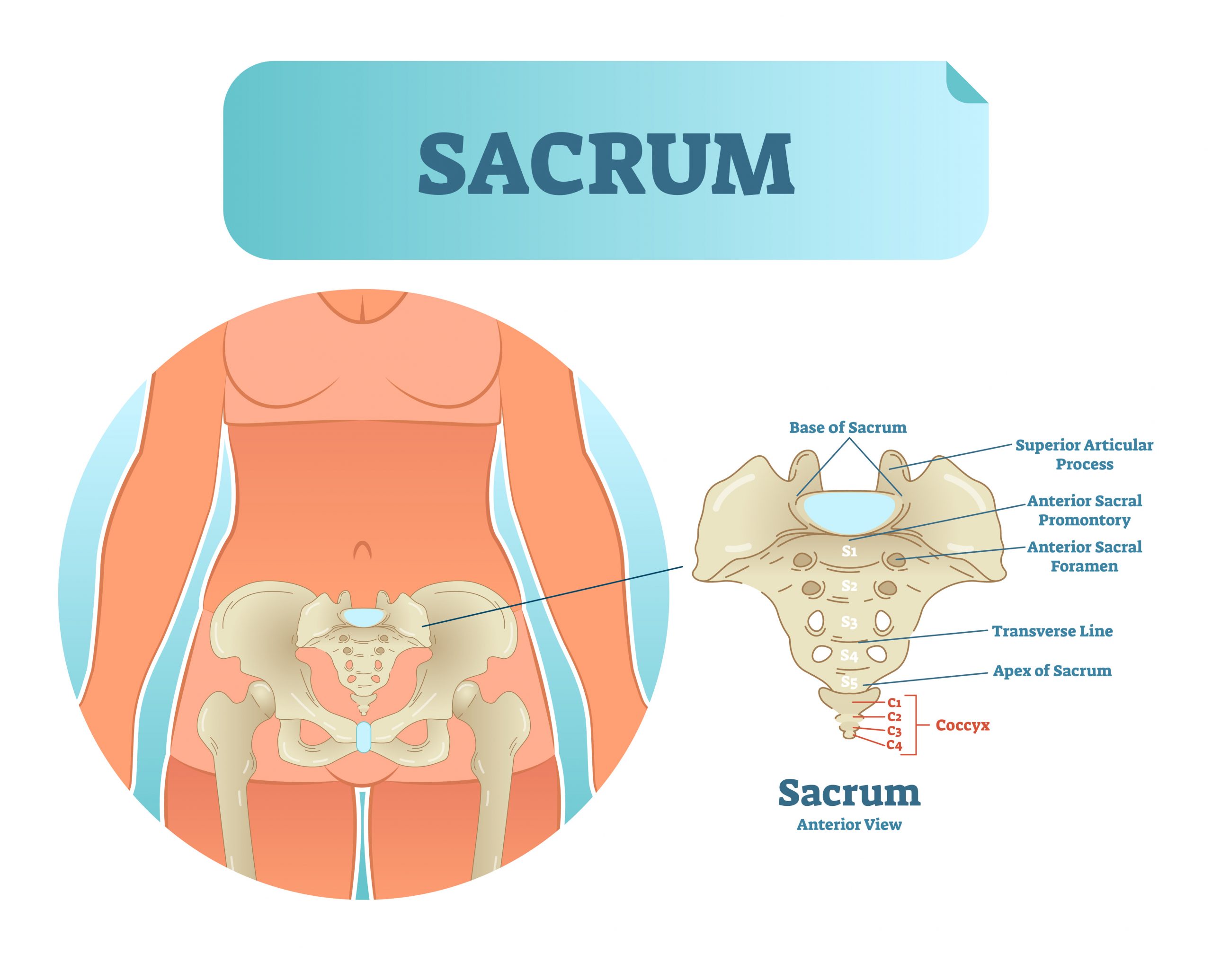 Once I woke up with a weird, nagging feeling on the bony part of my right butt cheek. My sacroiliac joint was not happy. It was sort of a vague, nagging ache that seemed to evade any attempts to touch or pinpoint it.

It was pretty soon after I’d had my son, so my ligaments were still rather loose. I’d been to a fun vinyasa class the day before where we played with different standing poses like Warrior 1, Warrior 2, Triangle, Side Angle, Half Moon, Reverse Half Moon, Reverse Triangle, Low Lunge, Low Lunge twist, etc. – and then some of the usual downdog-chaturanga-updog flinging around before we did it all again on the other side. I was enjoying the music, the flow, and the workout.

But I paid for it the next day. My SI felt wonky – even walking was uncomfortable.

I knew there was some correlation between the class the previous day and the discomfort I was feeling. But what I didn’t know at the time was that the tweak would send me on a journey of learning and discovery about the things my body liked to do, and things my body did NOT like to do in yoga practice – if I was going to enjoy healthy SI joints for the rest of my life. 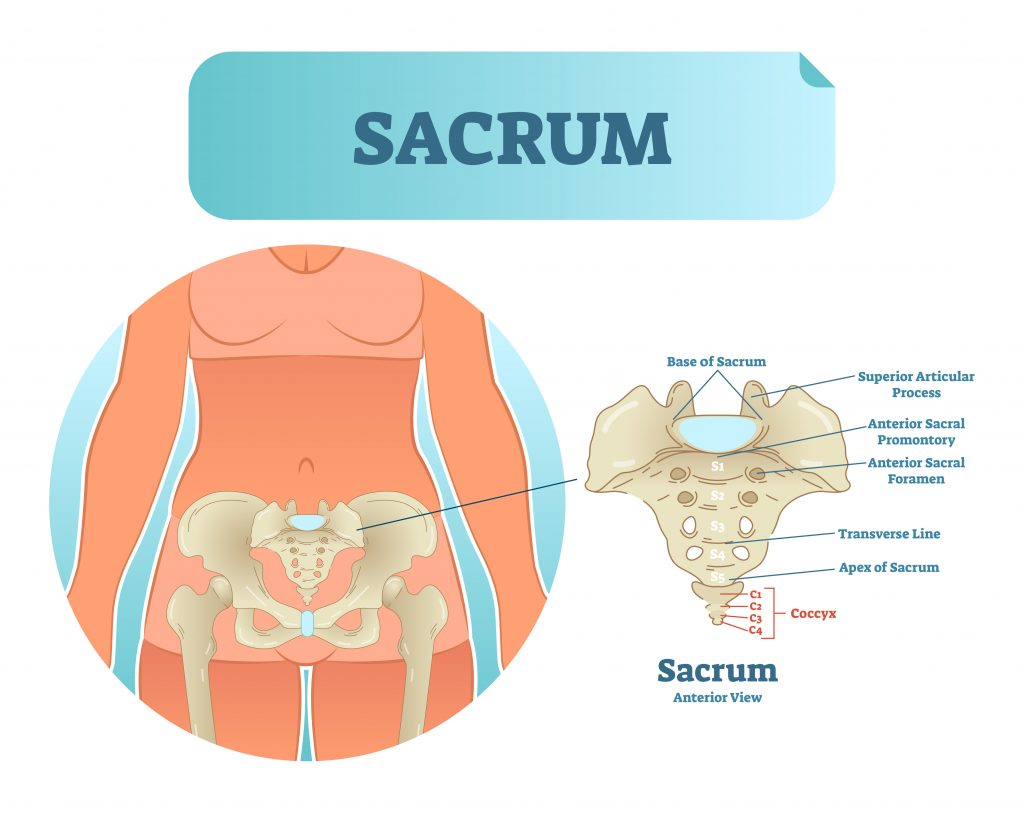 The sacrum is the largest spinal bone and the thickest. After death, this is the last bone of the spinal column to decompose. Apparently, it was common practice for ancient Romans to chuck their corpses just outside of the city walls (bring out yer dead!) – so there were plenty of corpses lying around in various states of decomposition and someone, with either anatomy or psychopathic tendencies, noticed that the sacrum lasted longer than the rest of the spinal column.

As Christianity spread, so did the belief that the sacrum bone was important for the body’s resurrection in the second coming. This is perhaps why the word “sacrum” evolved to be so similar to the word “sacred.” Another possibility for the connection between the words “sacrum” and “sacred” is that the sacrum was often central in animal sacrificial rites/ceremonies. Another idea – the sacrum protects the pelvis, which was considered the sacred area of the body because of its reproductive capacity.

Indian tantric yoga practitioners believed that the latent spiritual energy or kundalini resided in the coccyx (or coccyx area) – this is detailed in texts that discuss the chakras. Since the coccyx is quite small and attached to the sacrum, perhaps the whole thing (the sacrum plus the coccyx) was considered the most sacred area of the body. 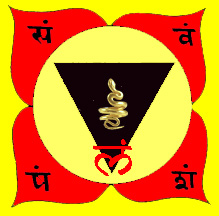 At any rate, today SI joint problems plague the yoga world – as if we’ve lost touch with the sacredness of this part of the body. SI problems are also common in dancers – which makes sense since so many folks who are attracted to dance are also attracted to yoga.

So why are the SI joints so vulnerable in yoga?

One reason may be that the sacrum is designed more for stability than mobility. It is supposed to support the upper body weight and provide a nexus between upper and lower body loads. The sacrum only moves when you move other joints – mostly the hips. But the sacrum needs have a little mobility of its own – and that’s what the SI joints are for. If your sacrum didn’t have some mobility, you would topple over rather easily every time you tripped over a shoe, the vacuum cleaner, or (as is typically my case) the cat.

Problems occur when we ask too much of the sacrum’s limited mobility, and intense asana practice often exploits it.

This can happen when you spend a lot of time in a wide stance (or wide seat) doing lots of asymmetrical things. What happens is that your hips start to demand more of your SI joints. And when your legs are wide apart and you are doing a bunch of poses on one side for a long time, you run the risk of overstretching those sacral ligaments. Of course it’s more complicated that than and things like scoliosis can play a part – but this is the main problem. And it doesn’t have to be that way!

While sequencing for a sustainable practice is an art and science that takes me days to unpack in trainings, there are certain principles that can be immediately useful for folks struggling with SI issues – particularly if they are practicing a lot of vinyasa.
via GIPHY

The most basic guideline is this – stop practicing so many asymmetrical poses on one side before doing the other side.

Instead of doing a whole bunch of poses on one side, and then doing the same thing on the other side, do maybe 2-3 in the same direction (like Warrior 2, Triangle, and Half Moon OR Warrior 1, Pyramid and Warrior 3) before you do (if you do, because it’s not necessary for a good yoga practice) your downdog, vinyasa stuff, then do the other side. This is a good preventative strategy. (and just to be clear, the GIF above is just for fun, I’m not recommending what she’s doing there).

However, if you already have SI issues, you may wish to stop the asymmetrical flows completely for a while and keep your practice symmetrical (Cobra, Cakravakasana, Bridge, Locust, Standing Forward Bends, Chair, Downdog, etc.). Another culprit is seated asymmetrical poses like seated twists and forward bends like Head to Knee pose. You’ll wanna leave those out for a while too. 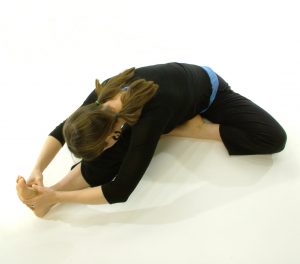 Focus on symmetrical poses and building stronger muscles around the sacrum (mostly your glutes) until you heal the joint.

Once I learned these secrets of sequencing my whole practice changed and my SI began to feel much better. I really hope yoga peeps can stop messing up their SI joints and teachers can stop facilitating this unfortunate phenomenon. If you know a practitioner or teacher who struggles with SI discomfort, please share this blog.

Many thanks. BTW, this month we are digging into the sacrum in my membership group, The Subtle Yoga Resilience Society. Please join us!