It's Summer Solstice – Why not Get Out there and Salute the Sun?

In yoga, the sun symbolizes spirituality and the movement of the sun, the process of awakening. The solstice is a bittersweet turning point in the year. Sweet because the sun is so strong and full of potential – all the inner and outer work of the previous months is coming to fruition. Bitter because this is the day the light begins its decline.

The hopeful beauty of yoga philosophy reminds us that regardless of where we are in the year, there is always an inner sun which can shine. Sun salutations can fire this inner light. The practice serves not only to show reverence to the  physical and spiritual Source of life, but also to remind us that, our very essence is, in fact the sun. We are fractals – unique replications of the Cosmic reality.

The Sun Salutation, or Surya Namaskar is an ancient practice, but it became popular through the efforts of HH Meherban Shrimant Raja Bhavan Rao Shrinivas, the King of Aundh in the early part of the 20th century.

Variations were adopted by both Swami Sivananda and Krishnamacharya and were carried into all the schools those systems have influenced – including Integral yoga, Ashtanga, Vinyasa and the grandchildren of these systems.

The mantras I’m chanting on the recording here are actually from the Ramayana, but were linked to the Surya Namaskar by Swami Satyananda of the Bihar School of Yoga. Sometimes they are performed at the beginning of the practice, other times with the movement. Swami Satyananda claimed that the 12 poses of the sun salutation done rhythmically, reflects the rhythms of the universe – the 12 months and zodiac signs – and that applying the form and rhythm of Surya Namaskar to the body generates a transformational force. His mantras really give a deep rhythmic resonance to the practice – students frequently comment how much deeper the chanting takes them.

When applying mantras to Surya Namaskar, first go into the numbered position, take a breath, and then exhale with the mantra. Start on the right side the first time. And then the left the second time. Repeat 6-8 times. It’s slower when you practice Sun Salutes with mantras, but the effect is really mind-blowing. Give it a try and see for yourself.

I recorded the mantras so you can hear what they should sound like (or at least approximately – I’m no Sanskrit scholar, but I think I’ve squeezed most of the Jersey girl out of my voice) The first time I include the English translations – the second two times are just Sanskrit so you can really get into the hypnotic flow of the mantras. Hope you enjoy it! 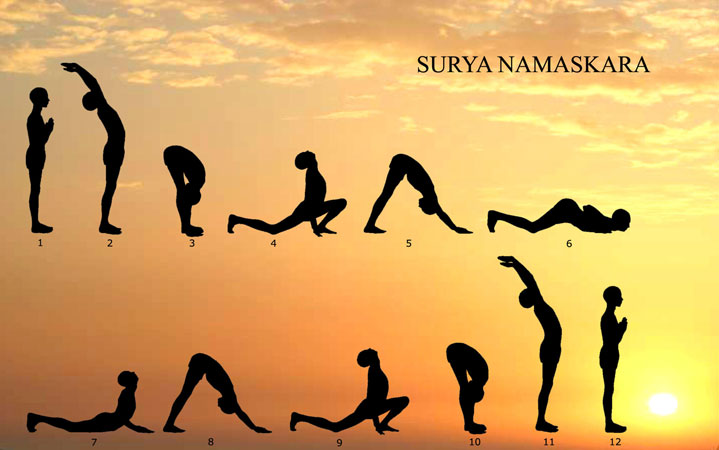 salutations to the sun mantras 2