This hippie, this scientist and this guru walk into a bar, and other stories from yoga teacher training

Apparently this came out of my mouth recently: 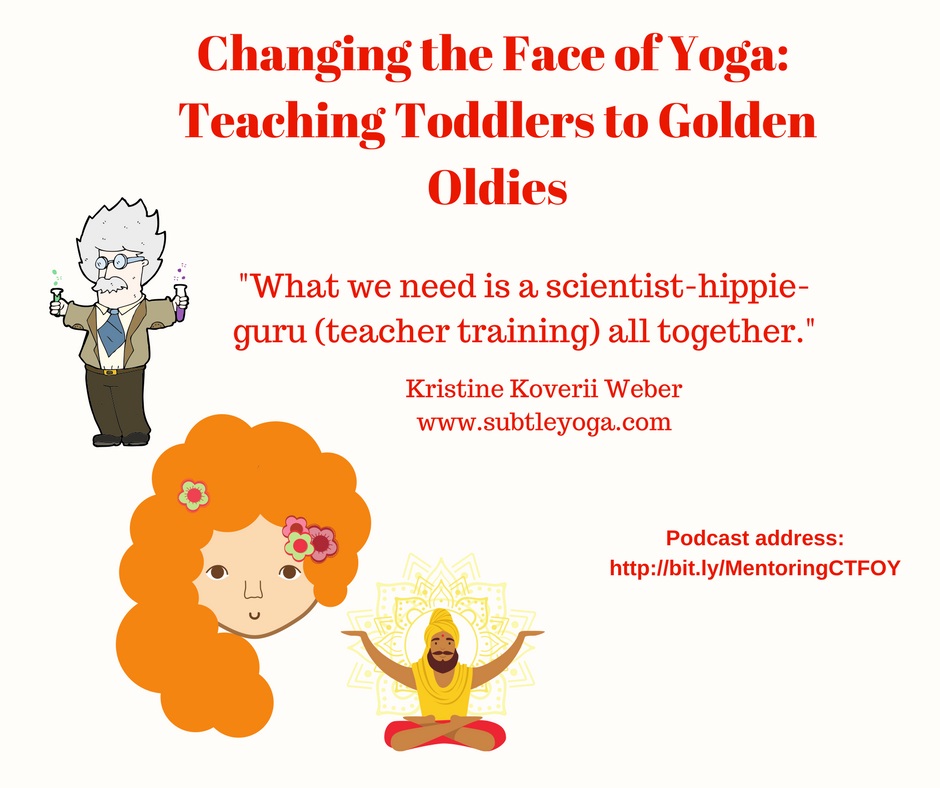 I was being interviewed for the Changing the Face of Yoga podcast and I kinda think I should attempt an explanation.

When I first started getting into the Yoga Sutras I became fascinated by the ways of knowing that Patanjali laid out. Early in the text (1.6), he says that we have five kinds of thoughts – and most of them are just plain wrong. First there’s the stuff that is, well, wrong, false, fake news, etc., then there’s our imagination, how we make stuff up (one of my teachers called it studying at MSU), then there is memory, which is likely inaccurate as neuroscientists will attest, then there’s deep sleep which is rejuvenating but doesn’t involve cognition, and finally, there’s pramana, or right knowledge, because occasionally, we nail it. But basically, your chance of being right is humblingly slim (and it occurs to me that there’s a good chance everything I just wrote is wrong, sigh).

So I was working on developing Subtle Yoga theory back then and I was really obsessed with this ways of knowing stuff. Einstein and David Bohm both said that wrong thinking is at the root of most of our problems. Thinking that you are right, when you just aren’t – which we all do, lots of times. David Bohm went so far as to say most of the problems we face in the world are due to this “crisis of perception.” He was a physicist getting down into the details of subatomic reality when his studies led him beyond the pot-smoking revelation to atomic evidence that wow, everything truly is interconnected.

“The notion that all these fragments are separately existent is evidently an illusion, and this illusion cannot do other than lead to endless conflict and confusion. Indeed, the attempt to live according to the notion that the fragments are really separate is, in essence, what has led to the growing series of extremely urgent crises that is confronting us today.”

So eminent physicists say that everything is connected – and even though I only know enough about quantum physics to be dangerous (though not in a nuclear way, whew), I started to think that personal growth is really all about shifting out of our mostly dysfunctional perspectives. Scientists have named the problem, but they don’t really tell you how you can get out of your subpar ways of thinking. Whereas that’s the whole point of the Sutras. So “shift perspective” became the tagline of my logo. And then I wanted to make examining ways of knowing central to how I train yoga teachers.

The next Sutra (1.7) goes on to say that basically, you want to focus on this right way of knowing or pramana and there are three aspects to it – pratyaksha which is your direct experience, anumana which means using logical reasoning and agama which means authority, a competent person told you so. Then I realized these terms can be hard to keep straight, I mean the Yoga Sutras is full of lists of all sorts of things and if I think this knowledge stuff is important and I want to build a teacher training around it, I’d better give some examples. So I thought about what kind of stereotypes would exemplify these three ways of knowing – a Hippie for direct experience, a Scientist for logic, and a Guru for authority. So that’s where the quote came from.

So here’s the interview with the lovely Stephanie Cunningham of the “Changing the Face of Yoga” podcast. I talk a lot about yoga teacher training and the benefits of mentoring. Hope you can take a minute to listen while you are driving somewhere or washing the dishes. Peace out!

P.S. Our RYT200 Subtle Yoga Teacher Training and Personal Transformation program begins in September in Asheville, NC with myself, Eric Seiler and Marek Sawicki (still up for debate who the scientist, the guru and the hippie are but check it out!). Here are details.