“Every year I try eat better,” a yoga student Jen, told me in a frustration-tinged tone, “And I do really well for a while, but then I start to notice, around the end of February, that my old habits have come back and I’m eating candy bars again every day. I just don’t know how to make it stick.” Habits, whether good, bad or neutral, comprise much of our daily activity. Brushing your teeth, meditating and taking a shower are all habitual activities. But so is eating junk food, biting your nails, negative self-talk and spending too much time on Facebook. How do you make New Year’s Resolutions stick? Whether you’re trying to lose weight, quit smoking, stop eating sugar, or just trying to get to bed earlier here are some yoga ideas about employing the power of yoga and making it work for you so that your New Year’s Resolutions actually become healthy habits.

These also happen to be some of the core principles of my Subtle Yoga Training and Personal Transformation Program –  a unique journey toward becoming the kind of authentic, inspiring yoga teacher the world is waiting for.

We make a big mistake in our thinking about habits when we define them as purely individual behaviors and choices. In reality they have as much (perhaps more) to do with your social circumstances as they do with you personally. Many habits are the indirect, tremendously complex result of your social network. According to the folks who conducted the Framingham Heart Study, “When smokers kick the habit, odds are they are not alone in making the move. Instead, the decision to quit smoking often cascades through social networks, with entire clusters of spouses, friends, siblings and co-workers giving up the habit roughly in tandem, according to a new study supported in part by the National Institutes of Health (NIH).”

The Framingham study found that if someone you didn’t even know – a friend of your friend’s friend – quit smoking, you were 9 percent more likely to quit yourself. This means that people you don’t even know influence your habits. And guess what, if your best friend becomes obese, your chances of heading that way go up 171 percent. Is that a good enough reason for you to schedule regular yoga classes with your friends? 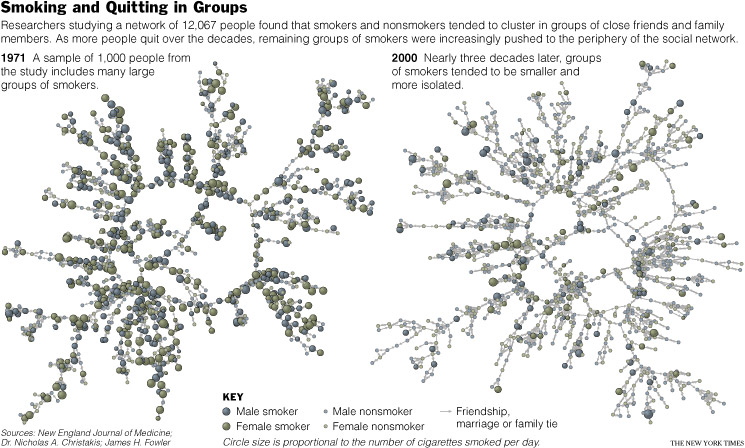 The yoga tradition recommends satsaunga or “keeping good company.” Perhaps the most powerful thing you can do to change your habits is hang out with people with good ones and encourage them in others.

One of my yoga teachers said to me, “Don’t worry about your bad habits, just meditate every day and see what happens.” We had been talking about whether or not it’s okay to drink alcohol, eat meat, stay up late and other habits yogis generally eschew. She explained that it’s not so much about steeling your will against what you should not be doing, but rather paying attention to cultivating what is good for you. Here are a few of my faves:

3. Visualize it, Believe it

Quantum physics has confirmed an important insight that yoga masters have understood for centuries – mind can control matter. Allowing the mind to stray into its old patterns is simply self-defeating fatalism: “I am just a heavyset person, that’s the way my whole family is, it’s genetic” or “I am a night owl and that’s when I do my best work and even though I’d like to sleep better, I just can’t.”

If we are really limitless as the teachings of yoga tell us, then why do we place these deterministic, tired old restrictions on ourselves? If you are really the universe, then how can you simply give up and resign yourself to being a chocoholic? One way of remembering your limitlessness is to be vigilant about catching yourself in your thinking patterns.

Here’s what Patanjali said: “Vitarka Bhadane Pratipaksa Bhavanam” If you’re plagued by a negative thought, cultivate its opposite. What is one thought that irritates you regularly? Find it’s opposite, see how it feels when you say it to yourself – say it over and over until you feel it, until you really believe it.

But like Cognitive Behavioral Therapy, Patanjali’s pratipaksa practice has its limits. This is because negative thoughts are often actually feeling patterns which are carved into the limbic brain – creating a shift with your rational front brain that percolates down into the depths of your non-verbal reptilian self may not be possible.

But yoga offers a powerful way to shift out of deeply held mindsets – meditation. Preferably twice a day, even if it’s just for 2-3 minutes upon waking and before going to sleep. It will help you connect with your Source, activate your relaxation response and put things into perspective.

Neuroscientist mapping the brain states accessed during meditation say that meditation slows the patterns called delta waves. These patterns, similar to those activated in deep sleep are associated with healing the body. Meditators learn to access this deep state consciously.

And if you’re resistant to meditation, or think that you are the kind of person who can’t do it, ask yourself this: What is more important than your emotional/spiritual growth? Traditionally for yogis, meditation has been the paramount practice because it is the ultimate tool for real, lasting personal transformation.

Sonja Lyubomirsky of the University of California at Riverside is studying the effects of keeping a “gratitude journal.” According to an article in Time magazine, Lyubomirsky found “ that taking the time to conscientiously count their blessings once a week significantly increased subjects’ overall satisfaction with life over a period of six weeks, whereas a control group that did not keep journals had no such gain.”

While research this is inspiring, I’m much more interested in why and how gratitude works. I simply feel better when I’m in a state of gratitude. And being in that state then activates the relaxation response causing me to do want to do more good things for myself.

As far as resolutions go, being grateful of what I have been able to do, the healthy habits I have created for myself, is a way to celebrate my health and being and helps me keep up the spirit all year long.